I can’t say I found this movie entertaining. I hadn’t seen it when it was released in 2015 because it was poorly reviewed by many critics I share sensibilities with. Then when the whole Time Out t-shirt debacle  happened (Vox did a good explainer on this). I was just totally turned off. I became curious to see the movie only after reading about the British suffrage movement recently.

I don’t think the movie offers a very compelling reading of the history of the suffragettes’ campaign. I would have liked to see a more realistic telling where we saw the gritty reality of infighting and animosity that caused chasms within the women’s suffrage movement. Feminist struggles are particularly interesting to me because of the difficulty inherent to a movement predicated on unifying a hugely heterogeneous body (see Simone de Beauvoir’s The Second Sex). Unlike the American civil rights movement, the Irish independence movement, or even the gay marriage movement where in each there is some dominant (somewhat) unifying culture that joins people together in their fight, women lack this. Gender is essentially intersectional, so it is much more difficult to get this group of disenfranchised people together and even harder to get them to agree to a course of action as women are just as different from each other as they are similar.

I found it incredibly odd that the movie ended with Davidson’s death (the real footage, can be seen on YouTube–trigger warning: this is the real, original newsreel footage of Davidson being trampled by the horse during the race). Perhaps I feel this way because I was empowered with the knowledge of what actually transpired in the movement before viewing the movie. I have been lucky enough to take a class with Daniel Ussishkin, and I would encourage you to read his very interesting works about this period if you are interested in learning more (Ussishkin; 2012, 2013, 2017). Knowledge of Britain’s Edwardian history notwithstanding, I can’t help but think that even viewers unaware of the history of British women’s suffrage would feel a bit cheated that they left out what happened between the end of the movie in 1913 and when limited suffrage was granted 1918 (or universal women’s suffrage in 1928, for that matter). It seems like they avoided most of the heavy lifting, opting instead to make it appear as though all it takes for voting rights is some violence (and patience?). If I had seen this in theaters I would have left unsatisfied and immediately Googled to find out what happened. In this spirit, I will try to fill in some of the blanks.

Scene of police brutality from the movie featuring the character Violet (Anne-Marie Duff).

Class was portrayed in a more subliminal way in Suffragette (2015). There wasn’t much explicit mention of the difference in treatment by both police and within the WSPU between the lower-class suffragettes like Maude (Carrie Mulligan) and Violet (Anne-Marie Duff) and the middle- and upper-class women like Edith (Helena Bonham Carter) and Alice (Romola Garai).

One of these is not like the other: Lady Alice would have been #NoNewFriends at the protest.

While there were a few times where it was more clearly expressed–Alice’s bail being paid; Maude insisting that Alice hires Violet’s daughter, Maggie, to her household so that she not be raped at the factory–overall the movie made it seem like there was abundant camaraderie between and among those of different social classes. In our accompanying reading, Kent (2017, pp. 316-317) discusses how quite contrary to the film’s depiction, there was a great deal of inter-class distrust within the WSPU:

The working-class complexion of the [Liverpool branch of the WSPU] organization throughout the period 1905 to 1914 distinguished it from the national body, which in the years following 1905 became increasingly elitist in character under the Pankhursts’ leadership (p. 316).

Kent goes on to mention the extraordinary actions of Lady Constance Lytton, who disguised as a lower-class suffragette was treated much worse in prison than when it was known that she was an aristocrat (the daughter of the viceroy of India and sister of a peer (p. 317). The solidarity Lady Lytton showed was uncommon, and not encouraged by the Pankhursts. The scene where Emmeline Pankhurst (Meryl Streep) stops in her covert escape from police to give words of encouragement to Maude &co. is not likely to have happened. In their propagandizing of the accounts of police brutality against lower class women like Leslie Hall and Selina Martin (Kent, 2017, p. 316), it seems Emmeline and Cristabel Pankhurst seemed to treat working-class women only as a means and never as ends in themselves.

Contrary to all promos for the film would have you believe, Steep does not star in this movie.

I would argue that director Sarah Gavron’s casting of grand dame of stage and screen, Meryl Streep—America’s most revered actress—as Emmeline Pankhurst lends an intertextual halo to the character. There is a great deal of intention in casting the most well-regarded actress in Western cinema in a part that only appears on screen a couple times for a few minutes. Streep’s casting in Suffragette (2015) lends a nobility and reverence to the character that isn’t earned merely by way of the plot—it is Streep herself, her qualities and renown that encourages viewers to respect Emmeline Pankhurst.

Streep went out of her way to promote this highly flattering portrait of the movement as void of class prejudice in press for the film: “Streep said: ‘The great achievement of the film is that it’s not about women of a certain class; it’s about a working girl, a young laundress, who looks like us, and the circumstances of her life were out of her hands, completely’” (Pulver, 2015 (Links to an external site.)Links to an external site.). Furthermore, Pankhurst’s limited time on screen bestows a kind of sacrosanct quality to her character, a feeling that she is too precious to even be known by viewers. All of this compounds to give an impression that the WSPU under Pankhurst’s leadership and the women’s suffrage movement in Britain, in general, was free of class prejudice.

True fact: suffragettes like Pankhurst won over the powers that be with by showing full-throttled support for WWI.

For more on the subject, you can read this article  by Ijeoma Oluo (2015) or others like it. by searching reviews of the movie. (Richard Brody’s review also gives a good critique of the portrayal of class in the movie, its infantilizing of the working-class). I would especially encourage anyone to do this if you don’t understand why the following image. received a huge amount of negative backlash (I myself didn’t get it at first). 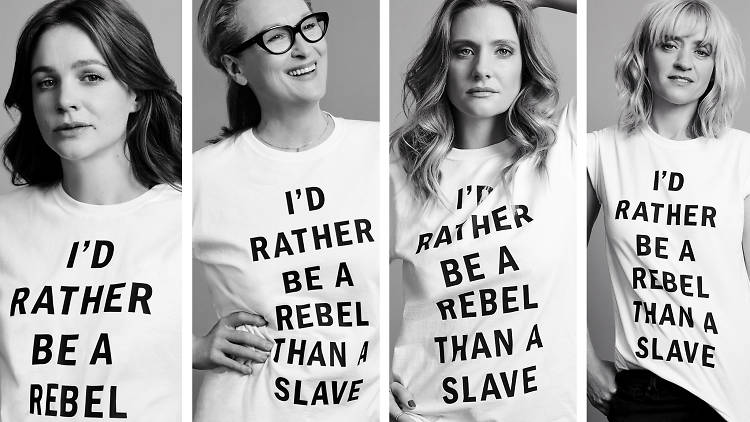 True fact: slavery is inherently non-consensual. If you can choose to be “a rebel” instead of (rather than in spite of) slavery then you’re not actually enslaved. African-American slaves and their allies rebelled against the racist dictates of American law BECAUSE they were enslaved. But thanks for the misguided (inadvertant?) callback to the Confederate “rebel” flag, Whie Feminists!

Casting the widely acclaimed Streep and making her role so minor intertextually bestowed the character of Emmeline with reverence due to Streep’s prestige as well as a kind of “beyond words” holiness for the role’s brevity. Beyond the artistic reasons for the decision, it obviously made the film more profitable. To be able to market the movie as a Streep vehicle drew both audience and critical interest.  Her short appearance could possibly also be due to the filmmakers both trying to accommodate Streep’s limited scheduling availability and not max out their budget on her salary.

This is basically the extent of Streep’s presence in the movie.

A movie about Emmeline Pankhurst that really dug in and showed her as a multifaceted person who was only part of the movement (she herself joining well after it had begun) would be fascinating! We don’t often get to see female antiheroes (for a good one see Netflix’s Alias Grace)–complex characters who do both good and bad, often for good and bad reasons. Being a woman in a time when she had much more limited rights than women do now, yet still, a person of privilege in other ways who went out of her way to deny equal rights to many–that is truly the stuff of great storytelling!

Oluo, I. (4 November 2015). Why I won’t write a review of Suffragette. The Stranger. Retrieved from

Ussishkin, D. (2012). “The Will to Work”: Industrial Management and the Question of Conduct in Interwar Britain,” in Laura Beers and Geraint Thomas, eds. A Brave New World? Empire and Nation-Building in Britain between the Wars (London: Institute for Historical Research).