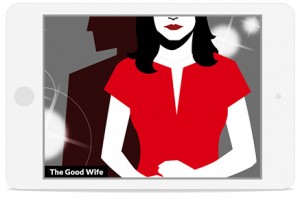 Best known for its crime procedurals like NCIS and event reality shows like Survivor, CBS doubled-down on its cash cow shows years ago, as unabashed king of back-door pilots spinning off into series. While comedies and non-crime dramas exist and are even popular on the network, the majority of CBS shows are similar in their lean toward the episodic end of the cumulative TV spectrum. A few shows break this mold, one of them being terminal drama, The Good Wife. An example of cumulative television, the show has survived seven seasons of repetition with a more episodic court procedural A storyline and a more serial reluctant romance B storyline. However, toward the middle of its seven-season lifespan, the show began to break from the CBS mold, pivoting more pointedly toward the serial, a choice that carried the huge payoff of prestige and a bite out of cable’s monopoly on sleek and dynamic television storytelling. Complex friendship dynamics, shifting loyalties, mergers, and backroom deals orbited an increasingly complex reluctant romance that climaxed with the death of the main character’s lover/former boss, Will Gardner. The show, not content with predictability, followed a more female story structure: there were more climaxes ahead, most recently one built over several years to explode in its final season.

While political arcs have always existed, the sixth season found viewers deep in a political bid by “the good wife” herself. No longer a dalliance with heavier seriality, Season 6, almost completely eschewed episodic procedural repetition to focus on two season long arcs: a named partner’s arrest, and a potentially multi-season political future for our heroine, Alicia Florrick. The writers played with the possibility of a Hillary Clinton-esque future for Mrs. Florrick. It would have been an excellent way to get around the trap of the show’s name, and multicast to a election-year America. After being pushed to accept as inevitable and righteous Alicia’s cuckolding of her husband with lover after lover, the audience, now hopefully in love with the concept of Alicia’s once hopeless love life having real legs, wouldn’t just accept further repetition of her “good wife” persona. If she was the next Hillary Clinton, however, the audience might accept the abandonment of Alicia’s “ex parte” love life for a daring political future. In a twist, the storyline came to a screaming halt at the end of the season with a voting fraud scandal. Perhaps focus groups didn’t like the idea, or perhaps it was too expensive.

With award show and critical buzz, The Good Wife expanded beyond its core audience of middle-aged women, though this growth was not reflected in ratings. The cache from overwhelming critical praise opened up more distribution windows. With its high production values, more serial nature, and superb writing, the show became more attractive to audiences craving “prized content.” It was now binge-worthy, and over-the-top (OTT) services took notice. I myself came to the show during its critically acclaimed fifth season, catching up on Hulu with seasons 1-4. I never thought I would like a show called The Good Wife—I assumed, and with it being on CBS, that it was hokey and furthered a destructive normative, anti-feminist agenda. I was quite wrong, and was quickly hooked like many people. This appeal to a more Post-Network audience came with a price…literally. The Emmy-worthy performances come from veteran actors who can demand top dollar. Serial storytelling has a high opportunity cost for its demand of viewer investment. Notably, the show is now very difficult to follow without seeing every single episode. Seriously. Every.single.one. (I’m still really confused and uncertain of what happened to Finn Polmar??) As prized content, The Good Wife was on the wrong channel, perhaps even the wrong format. Shows like it with complex, gripping storylines suffer from interruption such as commercials or mid-season/season breaks. With an older audience accustomed to primetime linear viewing and less adept at using time-shifting technology like DVRs and OnDemand, the show was alienating CBS’s core audience. The network has also refused to accommodate this problem, limiting their Hulu offering to past seasons. If you miss an episode of The Good Wife’s current season, you better be ready to pay because it is only available outside its original airing through OnDemand (paying with commercials one can’t fast forward through), CBS All Access ($5.99/mo), or pay-per-episode/season pass on services like iTunes.

For better or worse, the current season has gone back to a more balanced, cumulative form. The ratings have proven to be inversely proportional to critical praise, falling with each season. While this should be adjusted for “inflation” in the industry—ratings in general have fallen with the rise of cable and OTT offerings—network executives, unwilling to abandon old revenue models, have not adapted their audience (and thus, value) measurement with the times. With a hideously out of context Super Bowl 50 ad a couple weeks ago, CBS announced this as its final season. A shock to some, I think one moment in the current season rang the death knell for The Good Wife well before the tone-deaf recent announcement—a moment built up since season 2: a secret revealed to Alicia that was no secret to long-time viewers. In a nod to its enduring serality, I see this revelation as a catalyst to a confrontation the series has necessarily avoided for the past seven years: how can Alicia live a good life as the good wife?

The show executed this turning point either masterfully or infuriatingly, depending on whom you ask. CBS took the opportunity to stretch the moment out as far as possible as an end of episode cliffhanger for the mid-season finale, the conversation to be continued on the spring premiere. It was a bold move considering, as prized content, cliffhangers tend to anger rather than entice rabid fans. Eli Gold, a political operative who has served various roles in the Florrick’s lives from Peter’s campaign manager to Alicia’s, is the high-strung, often comic guide for both the audience and the characters. One can generally rely on Gold acting as a foil to Alicia’s exasperation with the political performance of “good wife” demanded of her. The moment is pivotal because it creates a sort of repetition apocalypse. With Alicia’s reaction, the writers seem to communicate that the character has finally reached her limit. The reaction is too severe to be believably assuaged with repetition tropes. This is a point of no return. The writers have set in motion a storyline where Alicia must assert her happiness and finally stop being The Good Wife. Viewers are now primed for Alicia’s inevitable divorce, and a satisfying end to their beloved series.

The relationship between Alicia and Will was the original reluctant romance. It was one for the annals of television romance, and produced a lot of cultural convergence like fan compilation videos such as the one below (which I can’t help but laugh at even though I like the show):