There is a certain satisfaction from seeing the good guy catch the bad guy. The tropes of genre allow one to anticipate a certain pattern and find joy when those anticipated elements come to pass (Smith, 2010). But what happens when this logic is subverted? In the current programming-dense “peak” of television, the avid postmodern viewer exhausts genre power, asking TV to be more, do more. In this way, not satisfying audience expectations actually produces more satisfaction. In Hannibal (2013-2015), a genre-defying television show developed and produced by Bryan Fuller, this is accomplished by complicating what is good and evil through careful aesthetic subversion that supports, in formal elements, a plot that with a consumerist morality deifies the bad guy, Dr. Hannibal Lecter (Mads Mikkelsen). In doing so, such a show invites the viewer to reconsider the status quo and contemporary morality beyond television, into reality. By making iconic horror villain Hannibal Lecter a success by the contemporary American neoliberal values of wealth, class, and beauty any attraction we have for him makes us question our own motives and the measures by which our society deems someone good. Hannibal  coded itself as a cool, intellectual TV show by using uncharacteristic art direction, costuming, and cinematography to make us like a killer by aestheticizing him and his grotesqueness, thereby critiquing what our capitalist society exalts.

Vanitas paintings flourished in the Netherlands of the 17th Century, according to the Encyclopedia Britannica, “A vanitas painting contains collections of objects symbolic of the inevitability of death and the transience and vanity of earthly achievements and pleasures; it exhorts the viewer to consider mortality and to repent.” Promotional materials are no accident, and so we can see the intentional association of Fuller’s Hannibal with notions of dueling morality in this art direction. While many people who see this image will not recognize the profound meaning it is meant to conjure, promotional materials are often filtered through news outlets whose worldly editors will understand and eagerly highlight and explain such an allusion—itself an expression of their own intellectual vanity. Fuller and his marketing team knew that a culture critic for a high-minded publication that wouldn’t otherwise review a lowly NBC police procedural would perk up at the sight of renown Danish actor Mads Mikkelson at home in an ad whose mise-en-scène evokes classical painting. In this way the show is presented to a broader, more culturally affluent audience; or, perhaps more importantly, their aspirants. Much of American culture is a fetishization of European culture, and this promo compounds to great effect. At a more implicit level, this promo is the first shot fired at a contemporary America that embodies everything vanitas paintings warn against: materialisms dominance over morality.

Other promo photographs and stills released to the media apply this same tactic, drawing attention to Mads Mikkelsen’s very European, high art portrayal of the familiar character. In the following promotional cast photo, Mikkelsen is in the foreground 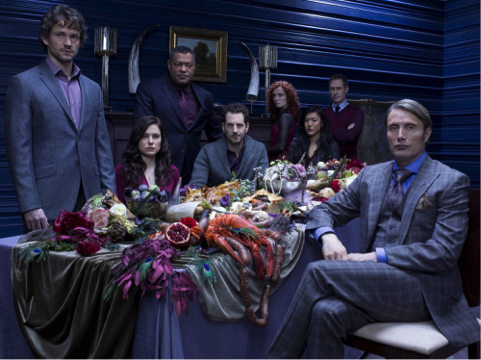 prominently in the Prince of Wales check three-piece suit and Double Winsor knot that is the uniform of Fuller’s Hannibal Lecter, a man of unparalleled style. Such a suit is conspicuous consumption, no less so because it is done by a fictional character—unlike real people, a character’s clothes are always very intentionally chosen. The aesthetic exaltation of Hannibal is commenced thusly. The aforementioned photo also introduces the all-important culinary theme. The cast of characters is gathered around an extravagantly dressed table overflowing with richly colored food of diverse color, shape, and texture. This table staging, also alluding to the paintings of old Dutch masters, is covered with food meant to elicit a reaction of awe and desire: food porn.

The food porn aspect of the show is important in several ways. It serves first, perhaps unexpectedly, to humanize the monster that is Dr. Hannibal Lecter, allowing us to begin our admiration of him via his skill and artistry and gawk at the wealth that brought him into contact with such knowledge: fine dining, fine schooling. The character Hannibal, a storied intellectual property, came to the small screen in 2013 with 32 years of baggage from the original Thomas Harris novels to the major motion pictures of varying degrees of success. This intertextual association meant that the TV show would immediately be compared to its predecessors, to fault or virtue.

In its paratext, Fuller’s Hannibal worked hard to present an alternative, entirely new version of the character. The best-known aspect of Hannibal as a character is his cannibalism. Many people who haven’t even seen Silence of the Lambs will have heard lines made famous by Sir Anthony Hopkins portrayal parroted to them through friends or in the media. Cannibalism is manifestly horrific: no bones about it. It is what makes Hannibal, more than a serial killer: it’s what makes him a monster.

It is here that Fuller subverts our expectation of horror, replacing it with admiration by aestheticizing his Hanibal’s cannibalism through genre-defying cinematography. While the low-key lighting is typical, the exquisite composition is not. The images we see of food both in Hannibal’s paratexts and onscreen are, in a word, gorgeous. Using techniques reserved for high fashion, art, and culinary photography, Fuller raises Hannibal’s stock visualizing him as a mesmerizing chef, a profession that sates America’s taste for bootstrap hard work, skill, and wealth (Chan, 2003).

Hannibal’s cinematography is astounding. Each shot is carefully composed to exploit the technical elements of filmmaking to shore up the story’s message of questioning what is good and evil. Both horror and suspense are genres that rarely prioritize formal beauty. Within genre conventions, shots are composed with the primary intent of creating tension and fear in the viewer. Most work in either genre is unremarkable artistically.

Fuller’s Hannibal differs by prioritizing beauty as a way to critique bourgeois taste and underline the psychological nature of its story. World-renowned chef and Michelin 2-star awarded restaurant owner, José Andrés worked with Fuller to create awe-inspiring dishes out of Hannibal victims. Speaking to The Hollywood Reporter’s Lesley Balla (2014), Andrés proved Fuller’s mission of aestheticizing the grotesque was accomplished, “Even if, ultimately, Hannibal is cooking human flesh, a lot of people say that when they see the food sequences, they wish they were at the table.” Figures 1 and 2 are from shots 25 minutes into “Mizumono” where Hannibal prepares dinner for Jack Crawford (Lawrence Fishburne) before trying to murder him. The selective focus on the knives and the actors’ reflections positioned to compositional perfection by employing the “rule of thirds” is as beautiful as it is suspenseful, anticipating the battle to come.

Earlier in the episode we see more artistry typical of the show’s formal aestheticization of narrative complexity. Four main characters are trained in psychology: Hannibal, Will, Dr. Alana Bloom (Caroline Dhavernas), Dr. Bedelia Du Maurier (Gillian Anderson). The plot focus on them is visualized sublimely with artistic journeys into the character’s thoughts and dreams. The rule of thirds is deployed to create the most beautiful version of what is onscreen. Similarly, the liberal use of telephoto lens creates intimate and appealing selective focus in almost every shot.

The ideological underpinnings of this means of aestheticization are complex. American television being an inherently commercial venture (Oullette, 2016) has, in its best interest, become incredibly effective at exalting a particular kind of consumerism, one that makes Dr. Lecter exemplary. Hannibal’s conspicuous consumption invites us to view him as wealthy. Capitalism is in essence about the unlimited pursuit of more wealth, and with the decline in power of previously prominent ideological institutions, becomes a governing morality. In our highly consumerist-capitalist culture, wealth and skill equal good. Bryan Fuller’s incarnation of Thomas Harris’ Hannibal Lecter has both in spades.

Hannibal’s high fashion wardrobe, home, and office are what make everyone question whether he really could be such a gruesome figure as the “Chesapeake Ripper.” His only other credential to decency is his being a doctor with a highly lucrative practice. These materialistic, superficial qualities are really the only means by which he is made to appear good. We might, in hindsight of this critique think this unbelievable, but one doesn’t when watching it because our capitalist society has made us all equate wealth with good. The neoliberal ideology of laissez-faire for the sake of wealth that has suffused all aspects of our lives regularly tells us that regulation impedes economic growth. But, as ideologies are wont to do, it doesn’t end there. The neoliberal concept promotes self-improvement at all costs because—let us remember—regulation is the means by which immoral behavior is curbed.

To be against regulation is to be against the government, and thereby against law enforcement. To justify such an outlook by pointing to the wealth it spurs implicitly states that getting what one wants is more important than its ethical ascertainment. This logically extends to the serial killer, who expeditiously gets what he wants by any means necessary. The neoliberal trashing of Kant’s deontological ethics does not end at the businessman’s door but extends to his treatment of any and all as a means to an end. Laurie Ouellette’s chapter “The Self As Project” from her Lifestyle TV explores this concept as she “situate[s] television’s impetus to shape and transform the self [in reality makeover shows] within the conditions of late modern capitalism” (2016, pp. 50). Ouellette discusses how reality shows “convey the idea that the self is less a fixed entity than a self-made project that involves a high degree of reflexivity, strategy and attention” (2016, pp. 50). Those same three things are used to describe the modus operandi of serial killers–“intelligent psychopaths” as they are called on Hannibal.

The art direction of paratexts, costume, and cinematography in Fuller’s horror show embed it with the aesthetics of American, i.e. capitalist, achievement. Hannibal’s unyielding pursuit of perfection in all aspects of his life is the manifestation of the American ideal of individualist success. Ouellette explains the concept thusly:

From cooking and home shows to makeovers and competitions, lifestyle-themed television presumes the freedom—and imperative—to create our own life trajectories and circulates resources (advice, instruction, templates) for aestheticizing, managing and transforming our wardrobes, bodies, homes, palates, psyches, behaviors and relationships. [,,,] As we will see, lifestyle and reality television has become especially useful to a governing logic that expects everyone to be ‘entrepreneurs of the self’ (Rose 1992) who maximize their everyday choices, and manage their own fates and fortunes, regardless of circumstances. (2016, pp. 51)

A deeper look at what it means for our most popular entertainment to inherently be a means to an end—programming was made to draw an audience to be sold to corporations as commodities (Banet-Weiser, 2017; Lopez, 2017)—frays the rich fabric of “The American Dream.” Fuller’s Hannibal personifies this in its dandification of Hannibal Lecter—no Queer-Eye necessary for this psychopath. Hannibal Lecter is explained as merely seeking and attaining the highest level of sophistication. Such

sophistication demands a rarefied palate: the most dangerous game, “long pig.” Good-looking, well-spoken, accomplished Hannibal has earned his American Dream by American means: hard work to get the most of the best, however one can. The best suit: bespoke Savile Row three-piece. The best meat: human. It’s as simple as that. When viewers finds themselves feeling approbation for Lecter’s lifestyle, it makes them question why this is the case…when he is so clearly a brutal monster. The answer lies in our dominant neoliberal ideology: the erasure of regulation lays us open to being tenderized by a bombardment of marketing messages that simmer us in lust for what we lack and make meat of our bank accounts as our souls for devouring by the upper class. Is Hannibal the height of civility? Yes…and he’s also a cannibalistic serial killer. Are they, perhaps, the same?